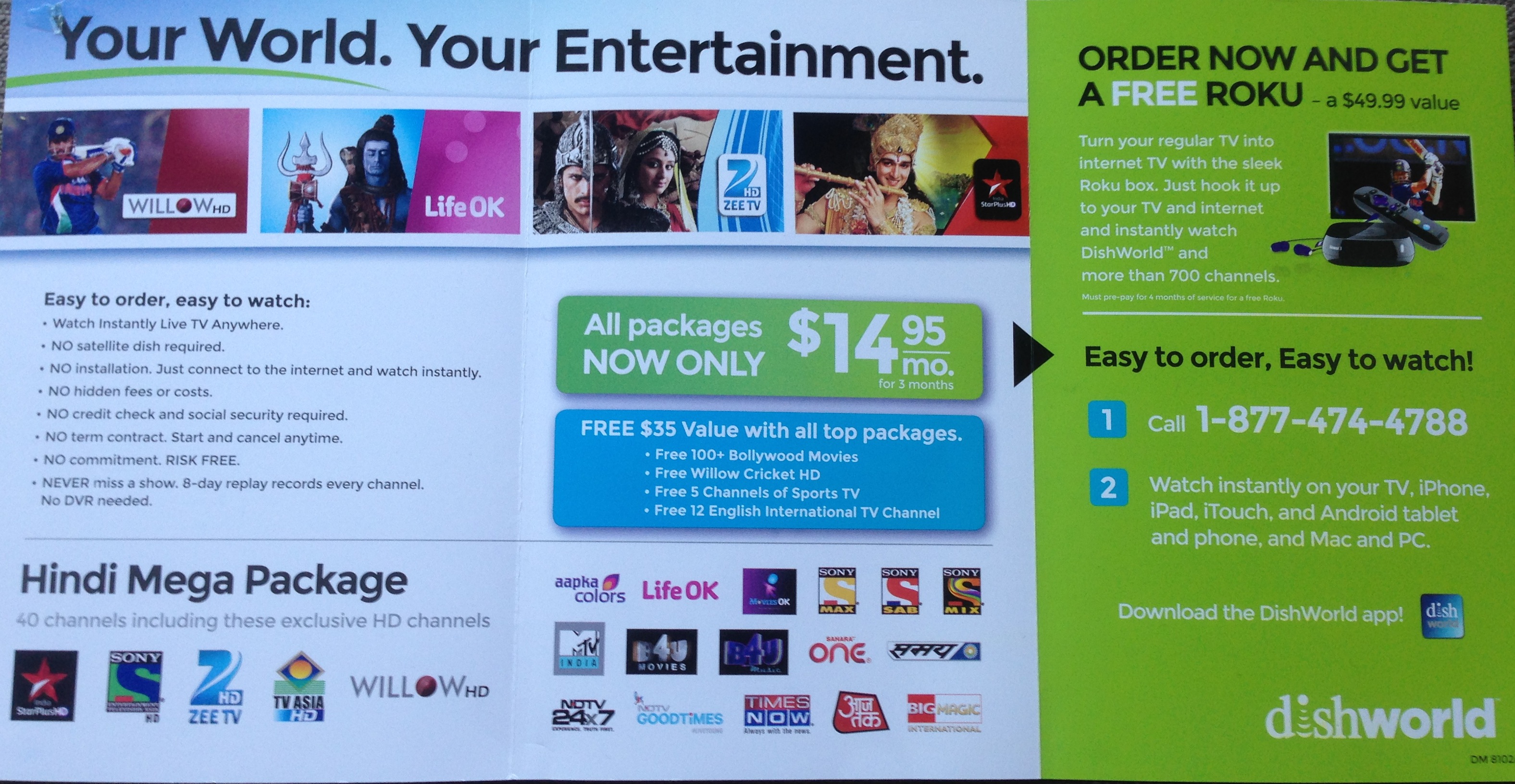 A couple of weeks ago, I received a very interesting flyer in the mail for a completely over the top (OTT) Hindi language content package from DISH Network (see cover image above).

This was the first time I had ever heard of DishWorld, which allows subscribers to watch live international TV without having satellite service (i.e, over the Internet). This particular offer was for a content bundle comprised of all of DISH’s Hindi language programming – the “Hindi Mega Package.” Interestingly, the service is contract-free and has 8-day replay records for every channel. 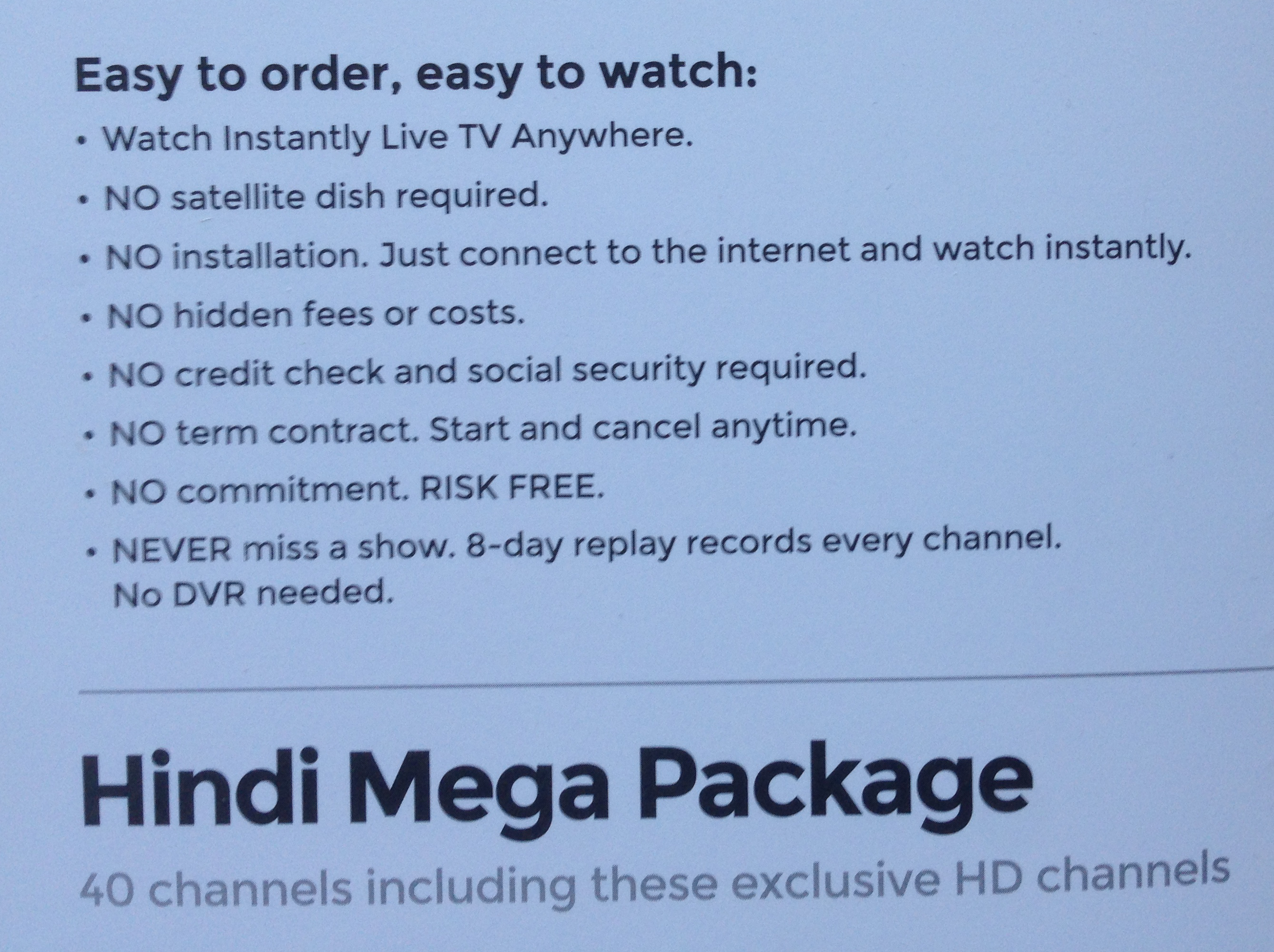 And the content is watchable on pretty much any device at any place where Internet services is available. 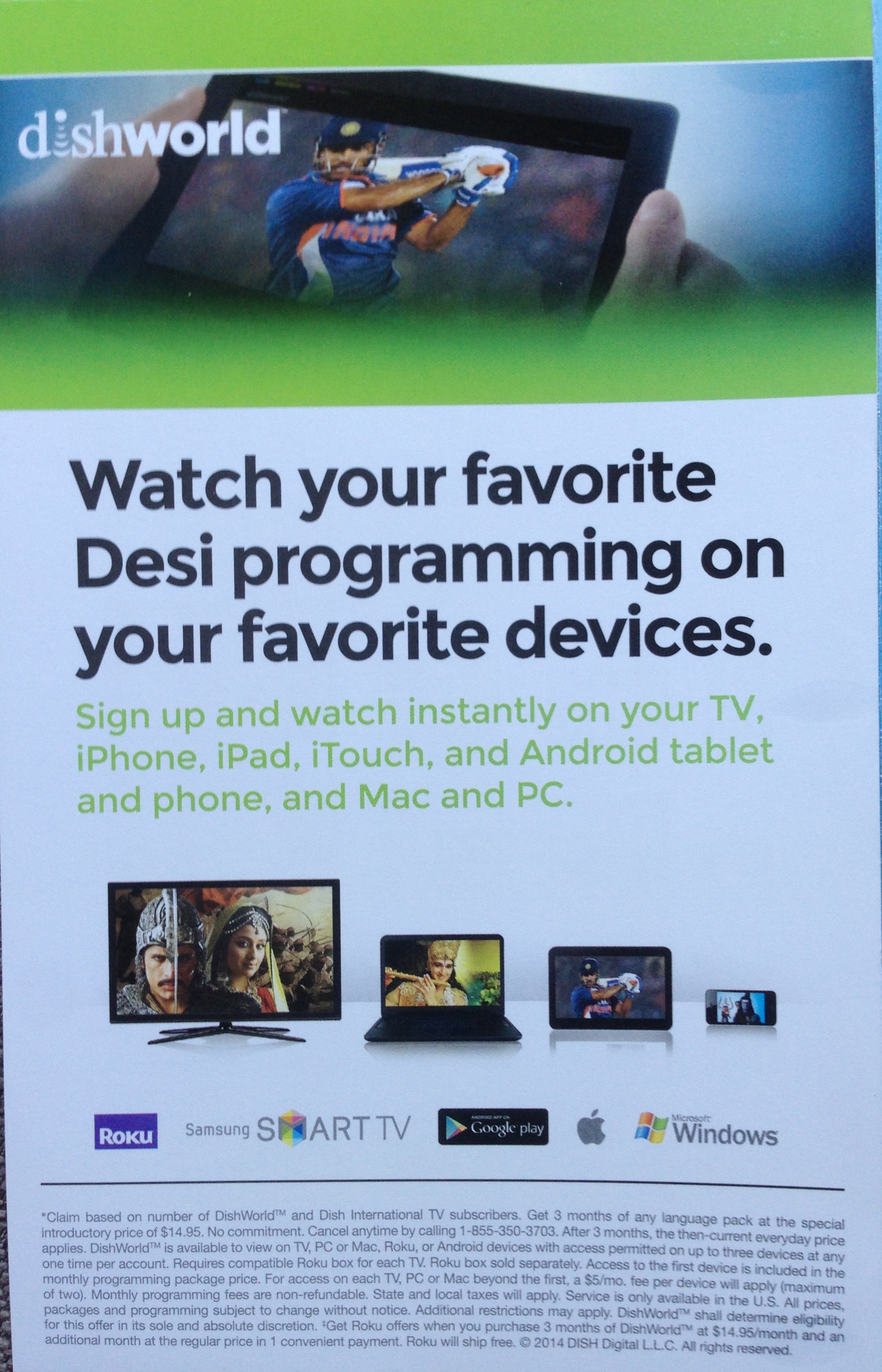 As someone whose parents are addicted to Hindi language programming from DISH Network, this OTT offering is intriguing, to say the least. In order to get their current Hindi package, which includes DVR service and multiple TVs, my parents are forced to pay substantially more than what the regular price for the OTT service probably is – it looks like somewhere between $45 and $55 per month – because they are also forced to buy a slew of American channels that they rarely watch. Specifically, they pay $55 for the Hindi Mega Pack and $55 for America’s Top 120 package. But they really don’t watch any English language programming other than the major networks (many of which are available for free over the air) and the “news” channels (e.g., CNN, Headline News, and CNBC). If they could combine the OTT Hindi Mega Package offering with less expensive American TV bundles, they could cut their monthly video bill down substantially and have the convenience of being able to watch their shows anywhere and at any time (within the replay window).

Now, Bloomberg is reporting that Dish intends to offer an OTT TV service starting this summer that will include some of the most popular American networks and cable channels. If that is the case, then we are seeing Dish truly accelerate its efforts to combat the threat from OTT video providers like Netflix and YouTube.

Dish will work with large content owners (e.g., the Comcasts, Disneys, and Time Warners of the world) to offer a happy medium between a la carte video content and completely bundled offerings. This will be mutually beneficial. The large content owners will lessen any possible future pricing pressure on their content offerings, both with regards to carriage fees and ad revenues (Dish will disable its ad-skipping technologies for its OTT services). And Dish gets the opportunity to become an “asset lite” multichannel video provider (MVPD) over time, transforming into a formidable competitor to the leading OTT video providers and earning outstanding margins on its service. Dish will also be able to use its negotiating leverage to distribute all sorts of unique content that has not typically been available in the U.S. (like Hindi language programming) to an expanding subscriber base.

Content owners with less popular content are the losers in these new OTT video deals. They could potentially lose a substantial amount of revenue unless they can really figure out how to charge their target audiences substantially more for their offerings. Because for people like my parents, they will be happy to pay $80 a month instead of $110 a month for the TV that they actually watch, especially if they can get it anywhere they want.

I’ve written before about how Charlie Ergen (controlling owner of Dish) has taken the lead in OTT video. These recent developments truly demonstrate how forward thinking the guy is. It remains to be seen to what extent consumers will benefit from the OTT video paradigm versus content owners/distributors, but whatever the split is, one can assume that Ergen knows how to maximize his own stake in the new world.